What do you want to learn today?

A seasoned food professional with over 27 years of experience, Denise Vivaldo has catered more than 10,000 parties and has cooked for such guests as George H.W. Bush, Ronald Reagan, Prince Charles, Bette Midler, Suzanne Somers, Merv Griffin, Cher, Aaron Spelling, Sly Stallone, Arnold Schwarzenegger, and Maria Shriver. She began her culinary training at the Ritz Escoffier and La Varenne in Paris, and then graduated Chef de Cuisine from the California Culinary Academy in San Francisco. Denise spent numerous years as a professor at UCLA’s Culinary Program and at her Alma Mater, The California Culinary Academy.

In 1988, Denise founded Food Fanatics, a catering, recipe-development, and foodstyling firm based in Los Angeles, California. Since that time, she has catered for such events as the Academy Awards Governor’s Ball, Sunset Magazine’s Taste of Sunset, and Hollywood wrap parties. She has also styled food for countless local and nationally syndicated television shows such as The Ellen DeGeneres Show, The Tonight Show with Jay Leno, NapaStyle with Michael Chiarello, and Access Hollywood Live with Billy Bush.

Denise is the author of How to Start a Home-Based Catering Business, which has sold more than 150,000 copies and is in its 6th edition, and How to Start a Home-Based Personal Chef Business. She is also the author of The Food Styling Handbook, Perfect
Table Settings, Do It For Less! Parties, Do It For Less! Weddings, and The Entertaining Encyclopedia. In addition to books, Denise is a contributing blogger for the Huffington Post as well as her own blog, Food Fanatics Unwashed.  Denise is passionate about passing on what she has learned. She founded the Culinary Entrepreneurship Program and she teaches catering and food styling seminars and workshops across the country and internationally.

Denise has helped many people with their cookbooks, including: Mariel’s Healthy Kitchen by Mariel Hemmingway; The Date Night Cookbook by Meredith Phillips; Somersize Fast and Easy Cookbook, Somersize Desserts, Somersize Chocolate, and Eat, Cheat and Melt the Fat Away, by Suzanne Somers; The Food Mover Cookbook and Steam Away the Pounds! by Richard Simmons; The Calorie Countdown Cookbook by Juan-Carlos Cruz; Eat, Taste, Heal by Dr. Tom Yarema; The 3-Hour Diet Cookbook by Jorge Cruise; and Hey, Mom! I’m Hungry! by Susan Powter.

A former art director and graphic designer, Cindie came to Food Fanatics as an extern in 2001 and is now an integral part of the team, managing Food Fanatics marketing and communications, developing and testing recipes, styling food for film and print, and researching and writing books including Do It For Less! Weddings, The Entertaining Encyclopedia, and The Food Stylist’s Handbook.

Cindie has also researched and written on culinary history for a variety of published cookbooks. Cindie and Denise hosted the HollyFood Insiders IACP Culinary Experience — Los Angeles in 2005. This grand adventure has led to further research on the culinary history of Hollywood.

Cindie teaches food styling classes and workshops in Los Angeles through the Culinary Entrepreneurship Program, along with plating and presentation seminars through the St. Joseph Center in Venice, California. 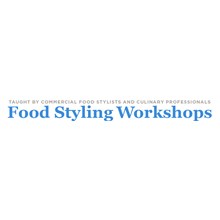